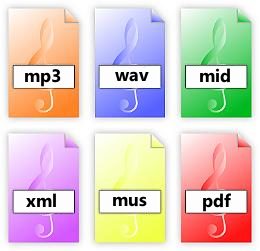 There are a number of different types of Audio files. The most common are Wave files (wav) and MPEG Layer-3 files (mp3). There are, however, many other audio file types discussed below. The type is usually determined by the file extension (what comes after the “.” in the file name). For example, “.wav”, “.mp3” etc.

Beside the audio files we also will use notation files (mid. xml. mus) and printable files (pdf). We limit this page to 6 file types which are explained as follows.

mp3. An MP3 file is an audio file that uses a compression algorithm to reduce the overall file size. It’s known as a “lossy” format because that compression is irreversible and some of the source’s original data is lost during the compression. It’s still possible to have fairly high quality MP3 music files, though. Compression is a common technique for all types of files, whether it be audio, video, or images to reduce the amount of storage they take up. While a 3-minute lossless file, such as Waveform Audio file (WAV), can be around 30 MB in size, the same file as a compressed MP3 would only be around 3 MB. That’s a 90% compression that retains near CD quality!

wav. A WAV file is a raw audio format created by Microsoft and IBM. The format uses containers to store audio data, track numbers, sample rate, and bit rate. WAV files are uncompressed lossless audio and as such can take up quite a bit of space, coming in around 10 MB per minute with a maximum file size of 4 GB.

mid. Unlike regular audio files like MP3 or WAV files, MIDI (Musical Instrument Digital Interface) files don’t contain actual audio data and are therefore much smaller in size. For example, a MID file can explain what notes are played, when they’re played, and how long or loud each note should be. Files in this format are basically instructional files that explain how the sound should be produced once attached to a playback device or loaded into a particular software program that knows how to interpret the data. This makes MIDI files perfect for sharing musical information between compatible devices such as a computer and a music keyboard. In our case MIDI connections are used between Finale running on a PC and the FP-90 Keyboard.

xml. An XML file is an XML (Extensible Markup Language) data file. It is formatted much like an HTML document. In our case we use musical XML files. This is a format  for representing Western musical notation. Compared to a MIDI file it contains deeper and more accurate notation information and is exchangeable between various notation programs such as Finale and Sibelius.

mus. MUS is a file extension for a music notation file format used by MakeMusic notation programs such as Finale. An MUS file includes only music notation, not audio data. MUS file data is in a MIDI format. Programs that open MUS files include various versions of MakeMusic Finale.

pdf. PDF stands for “portable document format”. It was introduced to ease the sharing of documents between computers and across operating system platforms when you need to save files that cannot be modified but still need to be easily shared and printed. We use the PDF format to print or share our sheet music.